Windows 8, without a doubt, is a mobile OS. It is a very shiny, hardware-accelerated, operating system — and there’s no denying the fact that a re-skinned Windows 7 desktop Explorer is just sitting there, eagerly awaiting your probing finger prod — but first and foremost it is a mobile OS; or “touch-first experience,” as Microsoft is euphemistically calling it. For an OS that is designed to replace Windows 7, the most rapidly-adopted desktop OS, that is slightly worrying.

Not an iPad killer

I should expand on what “mobile” means in this context. I don’t necessarily mean that Windows 8 will be an iPad/iOS killer — though it certainly could be — it is very clear that the OS’s most fundamental design paradigms are intended to be used while on the move. You can use a mouse and keyboard, but unless the task you’re trying to perform is “high resolution” (Photoshop, Office) you will be penalized for it. Nowhere is this more apparent than the Metro-style Start screen — but we’ll get back to that in a moment.

Now, just so you’re aware, the new Windows 8 Start screen in Windows 8. It is not a skin, it is not a separate app that launches at start-up; it is the new front-end of the Windows 8. There is a full-blown Explorer desktop that you can launch, but hitting the Windows key or button brings you straight back to the tiled interface. After some 20 years of growing accustomed to windows, icons, menus, and pointers, tiles are the new overlord — and there is no way to escape them. In other words, irrespective of whether you are a using Windows 8 on a tablet, netbook, laptop, or desktop, you will soon become very intimate with the Windows Phone 7esque Start menu.

These tiles can be operated using a mouse and keyboard, but it so painfully obvious that you’ remeant to interact with them using your fingers that you’ll soon stop using those pesky peripherals. You can scroll with your mouse wheel and drag-and-drop to pan your view, but the information density is so low that it soon becomes frustrating. Instead of seeing everything on your screen and making a choice, you have to scroll and zoom and click through multiple levels to get at the information you need, or to make the changes you require.

If you’ve ever tried to use a Windows 7 slate, you will no doubt be breathing a sigh of relief — but if you’re a desktop user, an office worker, a gamer, your face probably resembles an apoplectic raisin. You see, the Metro interface, being inherently a mobile interface, is designed around apps. Not apps in the contracted-form-of-applications sense, but small, single-feature, divinely-inspired-by-Jobs apps. You will never see a tile-based Photoshop — but I can guarantee that you will see a Windows 8 version of Photoshop Express, the iPad app. You will never see a tile-based Crysis — but I bet you a truck full of the finest swine that Angry Birds will be on Windows 8 at launch.

Get this: The entire Metro interface — the complete Windows 8 front-end — is powered by Internet Explorer 10. Not the browser with a back button and an address bar, but the IE10 rendering engine Trident. To drive this point home, Metro-style apps in Windows 8 can be written in HTML, CSS, and JavaScript, and they will be just as “low-level” as their C++ and C# cousins. In other words, Windows 8 runs web apps natively. 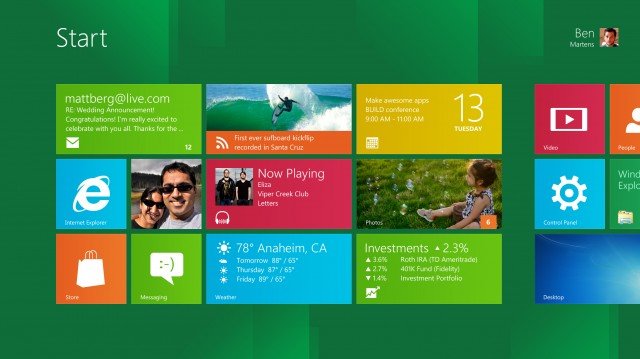 To put this into contrast, think about the current state-of-the-art in Chrome, Firefox, and Internet Explorer 9. Chrome has glorified extensions and bookmarks, Firefox is working on an Open Web App Store, and IE9 has pinned sites. Windows 8 will have web apps that are first-class citizens, capable of using all of the same hardware resources as any other compiled program — and it will all be powered by Internet Explorer 10.

This poses a tricky question, though. You see, not only does IE10 power Windows 8′s primary interface, but Internet Explorer 10 — the browser — is also available as a Metro-style app, and as a full-interface browser in the Explorer Desktop. All three versions are fundamentally identical. Now… what if Windows 8 is as successful as Windows 7 and all of its previous forebears? What if Windows 8 is actually a success on the tablet? If Windows 8 becomes ubiquitous, so does Internet Explorer 10 — and if IE10 can be found on hundreds of millions of devices, what platform do you think developers will choose?

It’s the great Web App Dream: write once, run anywhere. Do you write an app for tens of millions of iPhones and iPads, or do you write a single piece of HTML, CSS, and JavaScript that can run perfectly on every Windows 8, IE10-powered tablet, laptop, and desktop? Those same web apps, with a little tweaking, will probably even work with Chrome and Firefox and Safari — but here’s an uncomfortable truth: if Windows 8 reaches 90% penetration of the computing market, why bother targeting a web browser at all? Just write a native, Metro-style web app instead.

Finally, add in the fact that IE10 will almost certainly come to Windows Phone 8 next year, and you will have a single app container — AppX — that runs across every damn computer form factor.

Microsoft, threatened by the idea of OS-agnostic web apps and browser-based operating systems from Google and Mozilla, has just taken the game to a whole new level — and, rather shockingly, given that Windows 8 started its development in mid-2009, it would seem that the lumbering behemoth might have actually out-manoeuvred Google.

The source you can find here.