React is an extremely powerful library created by Facebook for front-end development.

React is a JavaScript library and an extremely powerful, flexible, high-speed tool for working with dynamic UIs, especially when the UI is related to data state.

As React is component-based, you can build encapsulated components, where each manages its own state. You can use and reuse these components to create complex UIs.

It can also be used to render on the server using Node.js and build powerful mobile apps with React Native.

Many famost internet resources are using this library. For a quick glance, here are some of them:

So, a lot of sites and companies use React.

REACTJS vs other FrontEnd Frameworks STAT.

Diatom Enterprises has been developing custom software since 2004. We manage several projects at the same time and keep track of every hour that our programmers spent on certain projects. Therefore, it is very easy for us to make a report and see how many of our clients have chosen the ReactJS framework, and calculate the ratio of changes in the share of projects using ReactJS compared to other Frameworks. 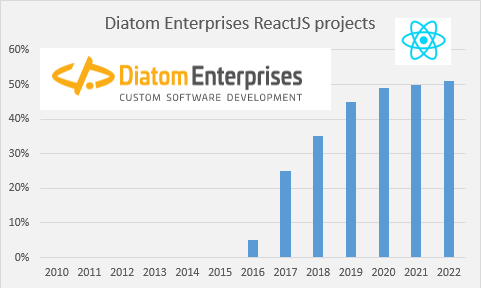 Want to know why? Here’s what React has to offer!

React works really quickly when used the right way. One of the most important rules is to correctly utilize the features provided by its virtual DOM. The main problem with the DOM is the slow process of creating dynamic user interfaces. But instead of interacting with the DOM directly, you can work with a lightweight copy.

You can make changes to the copy and then apply those changes to the actual DOM. While you’re at it, you can also compare the DOM tree with its virtual copy. If there is are differences between the two, only the differences will be redrawn. This avoids costly DOM operations and performs updates in a very efficient manner.

The logic is based on state, which can also be thought of as private data. Any changes to the UI should be related to state changes. This approach provides automatic DOM re-rendering, so developers don’t need to worry about UI changes.

By correctly utilizing state, it is easy to create well-flowing, dynamic, secure and user-friendly applications.

To help with state and data, developers can seamlessly integrate Redux, which is a predictable data-flow architecture. Redux maintains the state of an entire application in a single immutable state tree, which can’t be changed directly.

React components have their own lifecycles based on state and render logic. Developers can track state changes and component mount events. With all of its lifecycle features, React provides a very powerful and flexible way to work with data and UI.

What is JSX? Simply put, it is an extension for JavaScript that works hand in hand when developing in React, supporting HTML tags in your JavaScript code.

Using JSX allows you to have the HTML code written inside of the component in your JavaScript code; there’s no need to use external templating engines. This greatly simplifies the development process and makes it easier to understand and write new components.

A simple example of using JSX

There are a lot of third-party libraries created specifically for React (a simple search of the keyword ‘react’ in npm/yarn returns more than 40,000 results), which allows developers to focus on developing and creating the software itself.

This ecosystem is getting larger every day, with countless developers around the world contributing to it.

The MERN (MongoDB, Express, React, Node.js) stack is a collection of JavaScript-based technologies used to develop web applications. Together, these components provide an end-to-end solution for building web applications. You can handle the UI part with React, the server side with Node.js and Express, and include the database with MongoDB.

So why use this approach? For one, all of your written code can be in the same language – JavaScript! This can significantly speed up the development of software and help maintain it.

According to Stackoverflow’s yearly survey of developers around the world, React takes first place in Most Loved Frameworks, Libraries and Other Technologies of 2022. But why is that?

There are a couple of things to consider:

Of course, React also has its disadvantages – for example, it is not a framework, and it is only the V in MVC (model-view-controller) – but there are still a lot of good reasons to use it.

As mentioned before, React is a powerful, flexible and high-speed tool for working with dynamic UIs.

As it is continuously being developed by META, there is a huge ecosystem behind React, and the component-based architecture seems to be the future of web development. We at Diatom Enterprises look forward to seeing what it can do.

It’s a very good idea to use this library for different kinds of corporate and data management projects. The Diatom Enterprises development team has used React in several projects since 2015, and we are excited to see its growth and continue to use it in future projects.