So, you’ve greeted the world with your Node.JS console, and think of taking on a “real” challenge? Well, here’s one: weather forecasters lie, cheat and use linear splines where a Lagrange polynomial is clearly needed. To help with this, we are going to create a weather forecast aggregation service (“Aggregator” for short). The Aggregator will collect temperature forecasts for upcoming days, and hourly temperatures throughout the day to compare them against. That way we can tell which forecaster lies the least. The technology used to implement the service is Node.JS and TingoDB. We’re also going to use the WebStorm IDE because it allows for easy debugging.

Note that although we are going to make one project today, logically it will consist of two separate parts:

1. Setting up WebStorm and creating a new project

I’m going to quickly run through setting up the environment, so feel free to skip this chapter if you know how to do it.

First of all, you’ll need Node.js for this project. We’ll also use WebStorm. Though you can use any IDE of your choice (or none at all), all the illustrations will be for WebStorm, and we recommend that you get it.

The WebStorm IDE doesn’t require any special preparation to use. Simply click on File->Open, select a directory for your project from the tree (figure 1) and all the files in the selected directory (and its subdirectories) will be considered part of your project. 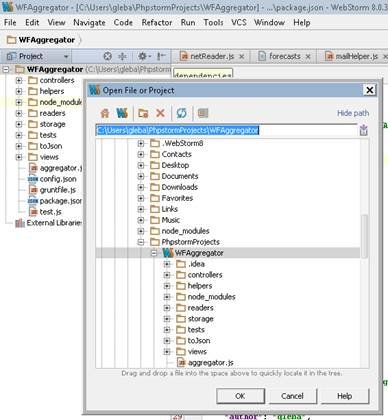 Next we need to configure a debugger for node.js. The command Run->Edit Configuration allows us to create debug configurations for application and test development.

Select the path to the node interpreter (that’s where you installed node.js), the path to the working directory and the main file to execute. During development, you can switch between debugger configurations to launch different source files.

If you read the previous chapter, you might already be wondering why I didn’t mention installing a database, or for that matter a web server.  That is because Node.JS will helpfully do this for you. The reason it can do so is that you have a Package Configuration file, (called “package.json”). The file contains the following information:

Here’s what ours will look like (again, you can safely skip ahead at this point, if you’ve already familiar with the material): 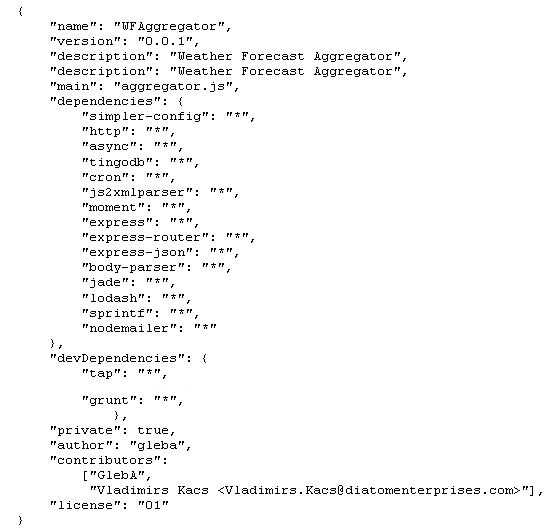 And here’s a rundown of the more important packages it mentions:

To be able to launch tests two primary Node packages will be used: the tap (Test Anything Protocol) test framework and the grunt tests execution environment.

We will use Node.js Express 4 framework for the website. Also, we will need to generate a web page, which means we have to choose a view engine. We’ll use Jade. (But you can use whichever framework you enjoy most, it will not affect our project in a significant way)

We’ll use the Node.js packages express and jade.

We don’t want to lose data we get from external services, which means that we have to store as close to its original form as possible. The problem is that various external services send us data in different formats. The solution is to use a NoSql database, like TingoDB (though hardcore fans of MongoDB can use that with minimal changes). This is the tingodb package you saw earlier.

Once the package.json is configured, all you have to do is open your project folder (the one where package.json is) and type in npm install this will get you all all the dependencies.

After the command is executed new folder node_modules is created. In case you’re wondering, that folder contains all Node.js packages enlisted in dependencies and devDependencies sections of package.json file.

The Aggregator will request data from external services, the response with forecast information will be transformed to Json-format and metadata is added. We’re going to need a separate toJson procedure for each external service. Finally, the result is stored in the database: 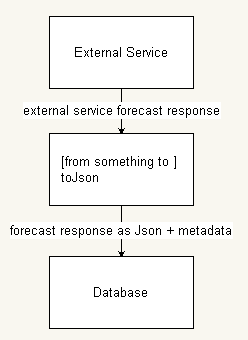 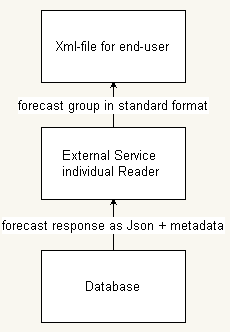 To be able to handle forecasts of external service, Aggregator has to have:

4. Teaching to the test

Since we’re going to follow the TDD methodology, the first thing we’ll do is write tests for what we want our component methods to do.

As I already mentioned, we’ll be using TAP to write tests, so we’re going to need to include it in all our test scenarios:

The basic structure of a test scenario is that it has a named batch (or several), containing named tests, which check (or as some people say “assert”) results against expected values. F.e.: 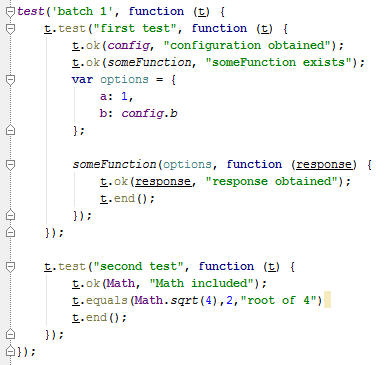 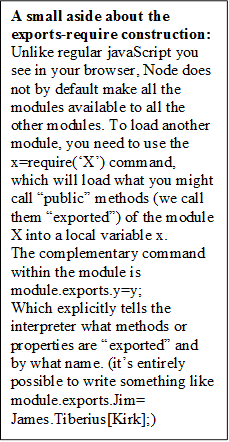 In the end we get a neat summary of which tests passed, and which failed, and why it happened: 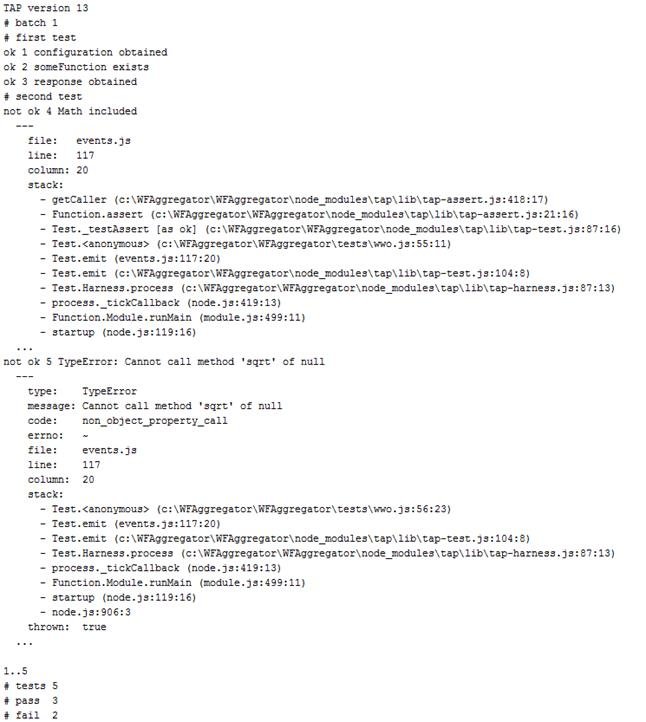 It seems like the Math module ‘got’ corrupted. (“How could that happen?!” I hear you cry. Nobody knows >:] But now we know where to look.)

As you might remember, getting the weather data consists of 3 steps: reading the weather from an external source, encoding it as JSON, and saving it all to the database.

So how do we know if a reader is getting anything? By running it, of course! If it runs, returns something and that something is in the expected format, then we can be fairly sure it works correctly (there’s always the question of the external service being buggy, but that is not something we can affect, so we’re just to have to trust them).

First we’ll need to get the module itself and its configuration files:

Then we should see if it’s valid, and that it returns something, so our basic test should look a little like this: 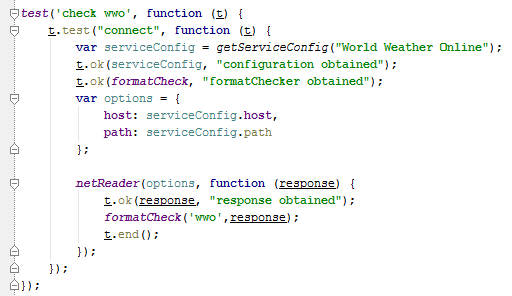 We should also test error reporting: 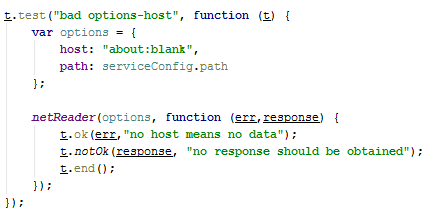 If we have more than one weather service (and we do), they should only differ in configuration and checker functions.

Along the same lines, we want to write a test for the encoder and database. I will leave these as an exercise for the reader.

Tests for the XML maker. Cut for time.

If you run any of the tests now, you might notice that none of them pass (this is good, actually- it means our tests work). We need to make the methods themselves.

5.1. About the configuration file

The file itself is written in JSON, and looks something like this:

Now all we have to do is make the request: 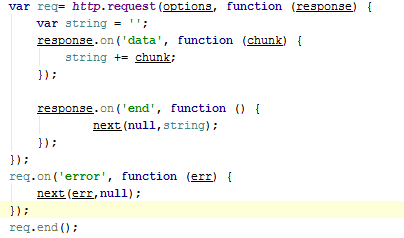 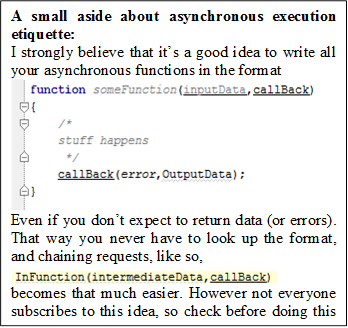 Since we already have tests to figure out if our reader works, we now have to do is run the test, and find out if our code works as expected: 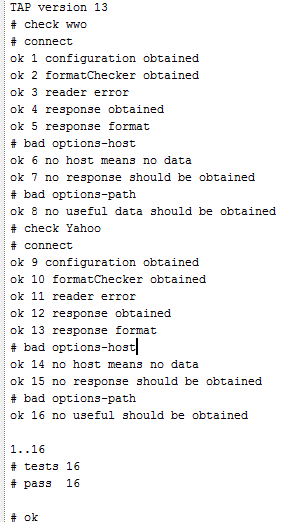 There’s a built in JSON object, which you can use to “stringify” an object into JSON format:

Using tingoDB is quite easy- there’s no need to run servers or design tables. Simply importing the module and setting up environment variables is enough to start working- and inserting automatically creates a table if it doesn’t exist. This makes it perfect for rapid prototyping and small projects.

Now all we need to do, is insert

Database helper is done in under 5 minutes.

Let’s make a process that goes through all 3 steps and downloads the current forecast into our database.

We’re going to use async to run all reader processes at the same time (they are, after all, mostly about waiting for the external service to return a response):

For each service we’re going to get the correct options:

Make a JSON with the correct metadata (to ease search):

And send it off into the database:

Finally, since we need this done every hour, let’s set up a cron job (Note to Unix users: in Node cron has precision up to the second, rather than the minute.):

And here’s what out TingoDB looks like after a couple of days:

Congratulations, you are now a proud owner of a weather aggregator service. 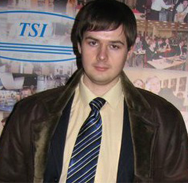 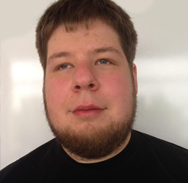