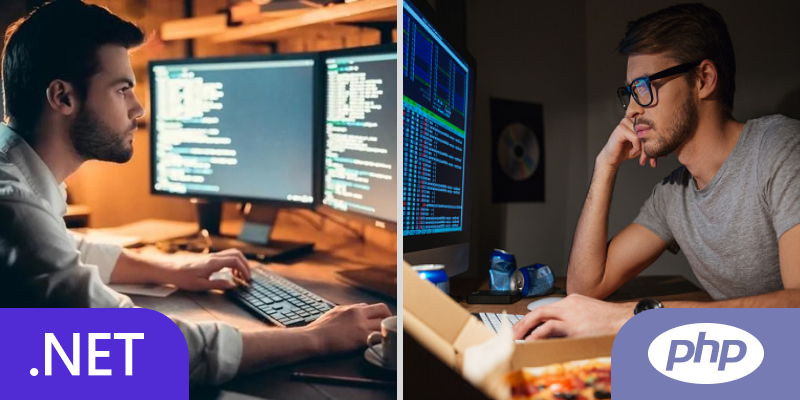 Are there any differences in managing teams working with different technologies?

Tricky question. In some ways, it echoes the popular (and provocative) question “Which is better, .NET or PHP?”. Let’s look at this from the point of view of a Project Manager.

In this formulation, we will not consider it, since it is obvious that each technology is good for its purposes. But what are the characteristic differences between technologies? Perhaps, if we answer this question, the answer to the question from the title of the article will become clearer.

Several beliefs exist in the professional environment. Ask a .NET developer about what is specific about this platform, and ask a PHP developer about the same, and they will readily list you a number of statements. We are interested in those of them that can somehow affect the management of the project.

On average, it all boils down to the fact that a PHP project can be cheaper and faster, and it is easier to find developers for it, but there are also higher risks associated with an insufficiently developed project architecture and insufficient code quality. A .NET project, in turn, is likely to cost more and be more sustainable.

Comparisons between .NET and PHP developers

A friend of mine compared these two technologies to transportation: PHP makes it easier to start from a standstill and accelerate like a motorcycle from a crossroads. It will be more convenient to transfer a ton of cargo by car, which in this metaphor symbolizes .NET.

In the case of PHP, the learning curve is flatter and the distribution of skills on the salary scale is more “smeared”. This leads to the fact that it is quite easy to find people who can do something in PHP, but not the fact that they will be good developers.

PHP is a less typed language and can be written in a scripting style. Because of this, in long projects, in applications that develop for a long time, the severity of making changes is higher and those. debt is usually higher.

Also, PHP developers often have an underdeveloped approach to refactoring, it is more difficult to improve the structure of the code due to the very nature of the code.

In the case of the .NET team, It is a more difficult task to find a good .NET developer. That fact plays a significant role.

Since the cost per hour for a .NET developer in Latvia and everywhere here in Europe is generally higher than for a PHP developer, mistakes in estimating and budgeting will be more significant.

At its core, the work of a project manager is the same on PHP-based and .NET-based projects. We will maintain a clear and friendly communication environment with the team and the customer, keep an eye on deadlines and budget and serve the cause with the utmost clarity of the terms of reference.

Nevertheless, there is specificity, and, in my opinion, it lies in the area of ​​work with risks.

In PHP projects, the tech lead is critical.

If the tech lead is balanced and has enough perspective and can control where the team is going, very good things can be done. Also, I would spend more time on the QA and stabilization stages in PHP projects than on .NET projects.

When it comes to .NET projects, it’s important to estimate work as accurately as possible.

Let’s finish with philosophical thought. Comparing PHP and .NET developers is like comparing French and English. They speak different languages, but at the same time remain people. In the end, everything depends on people, they are the strongest and weakest things in the project.